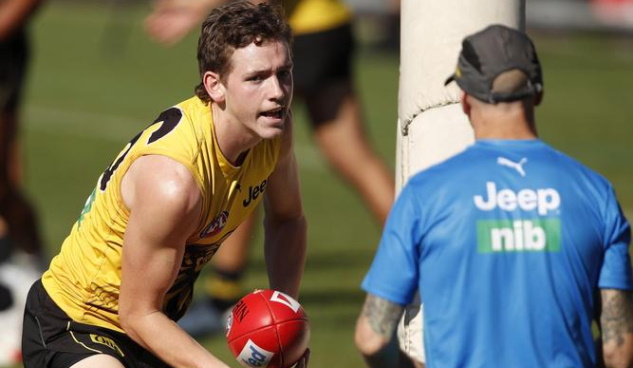 Round 9 of the 2021 H&A season begins on Friday night, @aflratingsPete ranks the Top 5 Trade Targets Under $300K in AFL Fantasy classic.

RCD appears to have settled in quite nicely at AFL level, the injury situation to the Richmond midfield provides extra security for his role & position in the team for the short to medium period at least.

The BE (Break Even) for Collier-Dawkins is quite healthy, he remains a target & should provide a decent ROI.

Byrnes was quite solid again for the Saints last week, he has averaged 17.0 Disposals & 7.0 Marks from his 2 games this season. He’ll likely slot into a wing type role again in Round 9, his short to medium term position in the team appears to be solid.

Byrnes likely remains a good investment at $240K, his BE (Break Even) is quite healthy.

Poulter was once again solid last week against Nth Melbourne, he’s averaged 58.5pts from his 2 games at AFL level. His role on a wing can provide him decent fantasy scoring opportunities throughout a game.

If Poulter can hold his spot in the short to medium term, his ROI should be quite decent.

O’Connor will make his AFL debut in Round 9, he is averaging 17.5 Disposals, 3.8 Marks & 4.8 Tackles in the SANFL this season. He’ll likely play through a midfield/forward role for the Crows early in his career, he’s played quite a bit through an inside midfield role in the SANFL this year.

If O’Connor can establish himself quickly at AFL level then he should see a decent amount of opportunities.

Highmore returns to the Saints team this week, he averaged 57.5pts from his opening 2 games of the season. He’ll likely return to a defensive role, he is averaging 14.0 Disposals & 2.5 Marks this season. A longer stint in the team will increase the ROI for those that have waited on Highmore to return, he’s still a viable option to trade-in.