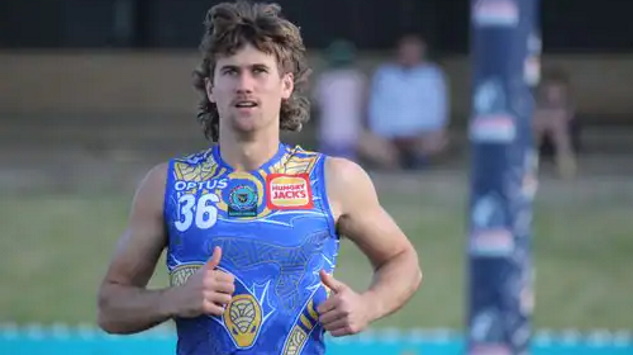 Round 18 of the 2021 H&A season began on Thursday night, @aflratingsPete ranks the Top 5 Trade Targets Under $300K in AFL Fantasy classic.

West will make his AFL debut for West Coast this week, he has averaged 26.9 Disposals, 4.4 Marks & 5.2 Tackles in the WAFL this season. He was selected by the Eagles in the mid-season draft, he plays through the midfield & can accumulate disposals at a high rate. It is expected he will see decent midfield usage with his contested type game.

At this stage of the season a downgrade to a minimum salary option is important, West has plenty of fantasy potential upside.

Durham will make his AFL debut in Round 18, he was selected by the Bombers in the mid-season draft. He has averaged 16.8 Disposals, 4.5 Marks & 3.0 Tackles on a wing from 4 games for Essendon VFL since being drafted. The spend down to a minimum salary type is important at this time of the year, with the Kyle Langford injury Durham should see immediate playing time as an outside midfielder in a wing type role.

An injury on the eve of Round 13 ruled out Reeves, unfortunately Jon Ceglar claimed his spot in the short term. Reeves comes back into the team this week, the Hawks under senior coach Alastair Clarkson will continue to provide opportunities to younger type players with a view to the long term future.

Reeves has shown excellent scoring ability from a fantasy perspective, his ROI should be strong.

Garcia has settled in quite nicely to a small forward type role at the Bulldogs, his scoring output has increased steadily in recent games. He recorded 15 Disposals, 3 Marks & 2 Tackles last week against Sydney for 57pts.

The low BE (Break Even) is somewhat appealing this late in the season along with his low salary, scoring could be volatile but he should provide a decent ROI in the coming weeks.

Frederick should be in a decent position with a growing injury list at Port Adelaide, his run & carry off half-back could be quite useful over the coming weeks for Port Adelaide. His BE isn’t that low but his scoring output should be decent, his scores this season have been heavily impacted playing as a medical sub. He recorded a season high 70pts in Round 6.