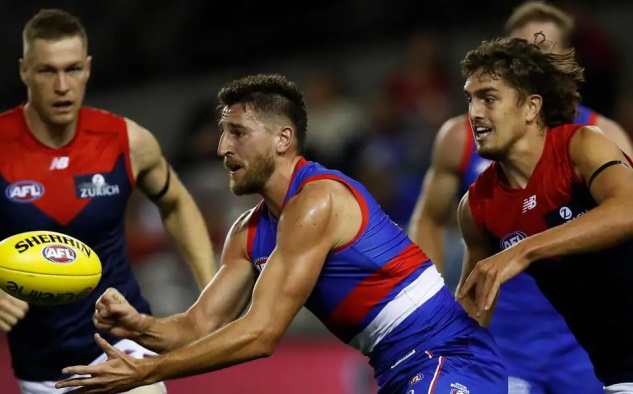 There are quite a few significant ceiling type players in the 2021 AFL Grand Final, if both teams play at a high level it could be a brutal contested game.

A look back at both games this year:

This game was played in heavy rain early at the MCG, conditions were made for a contested type game even when rain cleared. The Bulldogs jumped the Demons early with scoreboard pressure, the Demons closed within a few points late in the last Qtr until the Bulldogs pulled away to finish the game.

Key Notes: Adam Treloar & Josh Dunkley did not play in both games.

What to expect in the Grand Final:

Josh Dunkley could be used in a cooler role through the midfield.

Melbourne will try to implement Jake Lever as their main intercept defender, be aware the Bulldogs will look to disrupt what has been a strong Melbourne defensive unit this year.

Centre bounce usage is unlikely to change much unless injuries impact the game.

Jack Macrae, Marcus Bontempelli, Clayton Oliver & Christian Petracca should be in pure ball winning roles through the midfield, pairing high ceiling midfielders from the same team should be a consideration.

Completing a full blown high ceiling midfield roster will be difficult to pair with Max Gawn, Stefan Martin may see a decent amount of ownership coming in at a cheap salary. Luke Jackson & Tim English are definitely playable, Gawn should be the highest owned while English is likely to be overlooked by many.

Even though this shapes as a close Grand Final, any type of blow out could bring in to play a few fringe forward scoring options which are likely to be mid-low owned.

Half back/intercepting defender types might be overlooked by many in roster construction, especially with so many premium mids available to roster.

The Demons have recorded a negative Scoring Shot Differential in 2 of 24 games this season.

The Demons recorded a +11.3 Contested Possession Differential in the H&A season, they have averaged +26.0 in the Finals Series.

The Bulldogs averaged 90.6pts per game in the H&A Season (Rank 2), they have averaged 93.3pts in the Finals Series.

The Bulldogs recorded an average -11.5 Uncontested Mark Differential in the H&A season (Rank 16).

The Bulldogs recorded an average +58.8 Disposal Differential between Rounds 1-11, they have a -14.8 Differential from their last 14 games (-0.3 Differential in the Finals Series).