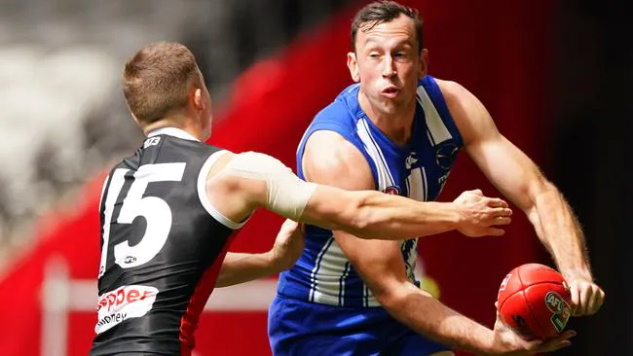 Nth Melbourne GM of Football Brady Rawlings has provided an update on the role for Todd Goldstein in 2022, with the addition of Callum Coleman-Jones there will be an adjustment to the ruck set up.

Senior coach David Noble is in favour of playing a dual ruck set-up, with the addition of Coleman-Jones it will impact time spent in the No.1 ruck position for Goldstein.

“This split is probably going to be different compared to what is has been.”

“We’ve been able to play him 90-95% in the ruck sometimes (over his career), obviously since Nobes (David Noble) has come on-board, he favours the two ruck model.”

“I think the split will be a lot more even going forward, at times this year it was probably anywhere from 75% still in the ruck.”

“That will reduce a bit more, and we’ll see him more forward.” Nth Melbourne GM of Football Brady Rawlings via Kangaroos Media.

He scored a season high 119pts against Gold Coast in Round 15.

The addition of Coleman-Jones will likely negatively impact the fantasy output for Goldstein in 2022, expect more forward usage compared to the 2021 season.

The Kangaroos are setting up their future plans, Goldstein is quite durable but will turn 34 next season.

Goldstein is a pass in season long fantasy, he should slide significantly in draft leagues.

“The aspect that we liked last year (2021) was the fact that every time Goldy went actually forward, he kicked goals.”

“His time forward for the number of shots on goal, he was probably behind Larks (Nick Larkey) & probably in front of Cam (Zurhaar). He was probably our most effective forward.”

“He’s awkward to match-up on, there aren’t too many teams that have got two defenders that are a couple of hundred centimetres. So it throws another element to the opposition.” Kangaroos Snr coach David Noble (October 19) via Sportsday.