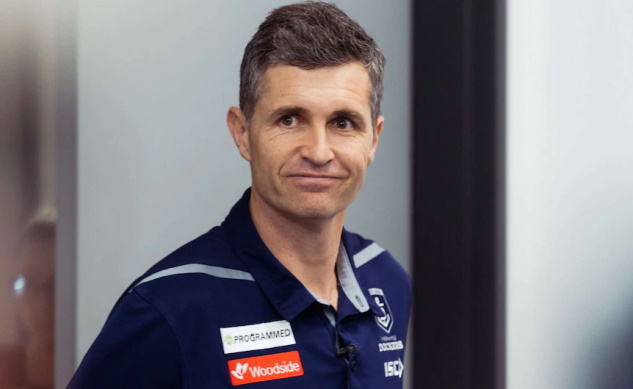 Fremantle senior coach Justin Longmuir has provided an update on game style for his team in the 2022 season, speaking on Sportsday on Friday night he stated the Dockers would start to open up in regards to quicker ball movement.

In his first year as senior coach back in 2020 Fremantle were a slow ball moving team, the Dockers averaged 8.2 Disposals per Inside 50 (Rank 18).

“Definitely we need to open the game up a little bit.”

“We feel like our defence & our stoppage work is really coming along,”

“we need to go a little bit quicker off the turnover, use our numbers & drive & take the game on a little bit more.”

“We need to find a little bit of balance with going fast & protecting the ball.”

“We were well down the table in a few of those areas last year, so there’s massive gains to be had over this pre-season in those couple of areas.” Fremantle senior coach Justin Longmuir via Sportsday.

FANTASY IMPACT: The game plan for Fremantle has adjusted in each year under senior coach Justin Longmuir, the slow ball moving team of 2020 didn’t eventuate again in 2021.

Fremantle are stocked for future talent in defence, expect playing roles to settle down in that area of the ground.

The loss of Adam Cerra should provide inside midfield opportunities for the newly acquired Will Brodie, he is set to compliment existing talent of Caleb Serong & Andrew Brayshaw etc.

Jordan Clark has also been added to the Fremantle squad & is set to be used across a half-back/wing type role in general play.

Remaining price sensitive for season long fantasy at Round 1 is vital, but expect increased security in roles for several players  especially in defence at Fremantle in 2022.

Holding onto the ball for long periods of time creating slow ball movement won’t be a feature for Fremantle in 2022.