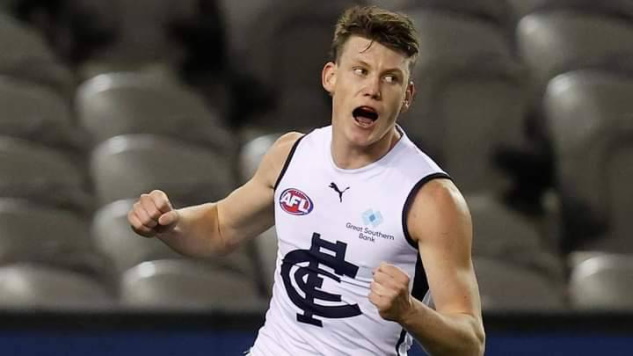 Sam Walsh has won the 2021 Carlton Best & Fairest Award, it is the first time he has won the John Nicholls Medal.

“What he has achieved in his career to date is extraordinary and becoming a John Nicholls Medallist marks another very special moment for him, which we and the whole Carlton family should be extremely proud of.

“While he is an undeniable talent, it has been extremely rewarding for our entire football club to see him continue to progress over the course of the last three years and enjoy another prolific season.” Carlton Head of Football Brad Lloyd via Blues Media.

He scored a season high 155pts in Round 18 against Collingwood.

The role for Walsh in the midfield for Carlton is likely to remain strong despite the additions of George Hewett & Adam Cerra over the trade period, his usage will be clearly set by new senior coach Michael Voss.

Walsh is a consideration for season long fantasy at Round 1, ownership will likely be well underweight compared to Round 1 in 2021.

He’s also a very strong consideration to be selected early in draft leagues, a check on his exact usage will still be required prior to drafting.