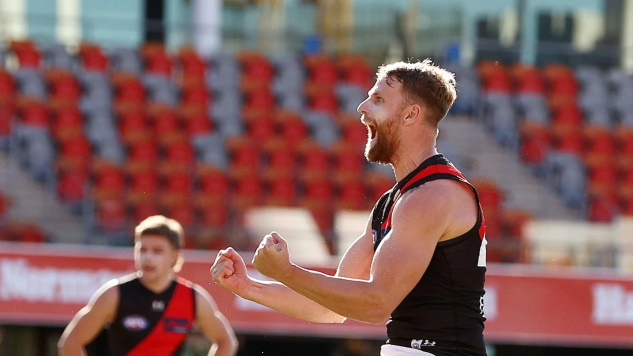 The form for Gold Coast has fluctuated in recent weeks, a strong win against Carlton last week could provide some much needed confidence.

Essendon have likely exceeded expectations this year & are highly motivated chasing a position in the final 8, the ball movement under senior coach Ben Rutten has been slick at times this year & given any opportunity through the middle of the ground can enter Inside 50 quite fast.

It certainly isn’t a battle of heavyweights at the ruck position, Zac Smith & Sam Draper have provided volatile scoring this season. Peter Wright is an option to roster ahead of both if you think Essendon can post a reasonable score against Gold Coast.

Darcy Parish has seen a decline in fantasy output in recent weeks, he has averaged just 82.3pts from his last 3 games. His salary remains strong & is likely to go under owned on Sunday.

Zach Merrett is likely the ceiling player that will be targeted by many on Sunday, he has scored 100pts or more in 85.0% of games this season. Expect heavy ownership.

It may be difficult to roster 2 of the 3 ceiling type players, Parish certainly could be avoided by most of the field with plenty landing on a Miller & Merrett midfield combo. But selecting two high salary players will result in thin plays to complete your roster.

Dropping down to Brayden Fiorini from either Miller, Merrett & Parish will be very popular, Fiorini just gets it done through the midfield, he has averaged 117.2pts from his last 6 games. Expect high ownership.

Matt Rowell is at a very juicy salary, he hasn’t set the world on fire this year but given an opportunity against the Essendon midfield he could surprise with a decent return.

David Swallow could be under owned, Dylan Shiel won’t likely attract that much ownership but has seen an increase in centre bounce usage in recent weeks.

Jake Stringer could be a slate breaker if he can hit the scored board in which should be his midfield/forward role.

Will Snelling may go overlooked, he has been reasonably consistent this year.

The Suns have averaged 97.8 Uncontested Marks FOR in the last 4 weeks

The Suns have conceded an average of 27.5 scoring shots in the last 4 weeks (Rank 18)

The Bombers have conceded an average of 100.3 Uncontested Marks in the last 4 weeks

The Bombers have a -11.3 average Disposal differential in the last 4 weeks