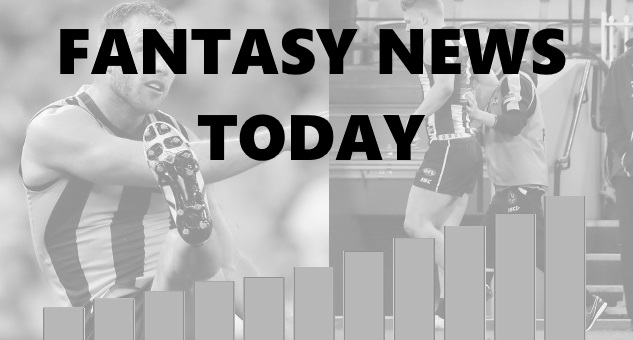 Another week and yet another key fantasy option is no longer available, GWS Midfielder Stephen Coniglio was ruled out for at least 8 weeks after injuring his knee at the MCG in Round 17.

The good news for Coniglio is that he did not rupture his ACL therefore it is likely at this stage he will complete a full pre-season & be available for Round 1 in 2020.

West Coast Ruck Nic Naitanui will likely miss the remainder of the H&A season after suffering an ankle injury in Round 17, Nathan Vardy is also sidelined with a knee injury while Bailey Williams recorded 12 Disposals & 30 Hit Outs with Keegan Brooksby recording 14 Disposals & 23 Hit Outs in the WAFL on the weekend.

“It is an ankle syndesmosis injury, but we are waiting on a medical report to shed more light on the precise nature of the problem” GM of Football, Craig Vozzo on Naitanui today.

Collingwood Midfielder Scott Pendlebury underwent surgery on the weekend, he injured finger in Round 17 & is doubtful for this week.

Taylor Adams will likely return for the Magpies in Round 18, he recorded 16 Disposals & 8 Tackles in the VFL on the weekend.

Anthony Miles & Jordan Dawson were suspended for 1 week by the MRO in Round 17.

Weather may impact 2 games in Round 18, check out the Weather Forecast for this week:

Fremantle has released Harley Bennell from his 2019 contract, he will continue to recover from a calf injury with a view at being selected in the off-season.

Sydney Half-Back Jarrad McVeigh has a fresh calf injury, key Forward Lance Franklin is still some time away from a return from a Hamstring injury.

Port Adelaide Midfielder Ollie Wines is Questionable for Round 18 after fracturing his thumb on Sunday, Brad Ebert is doubtful with a knee injury while Ryan Burton is expected to miss several weeks with a hamstring injury.