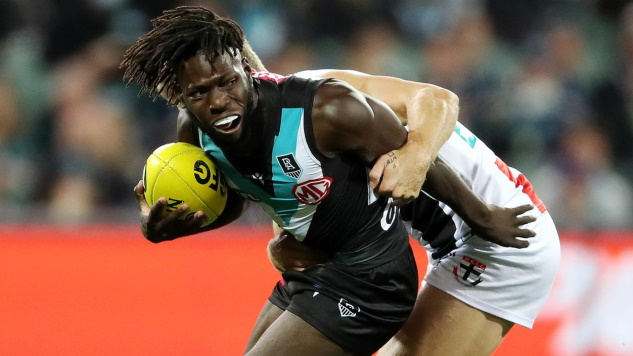 Round 7 of the 2021 H&A season begins on Friday night, @aflratingsPete ranks the Top 5 Trade Targets Under $300K in AFL Fantasy classic.

Frederick was exceptional in his AFL debut last week, he recorded 23 Disposals & 6 Marks for 70pts. He settled in across a half-back role, his elite line breaking speed was a valuable asset for Port Adelaide. The Break Even (BE) is quite healthy for Frederick, he should generate a decent profit over the next few weeks.

Collier-Dawkins will make his AFL debut in Round 7, he has averaged 22.0 Disposals, 2.5 Marks & 6.0 Tackles from 2 games in the VFL this season. He should see a decent amount of inside midfield usage on debut, he has been made to earn his spot in the team after being selected at Pick 20 in the 2018 AFL Draft.

If Collier-Dawkins can establish himself immediately in Round 7, he could retain his position in the team for at least the short-medium term.

Poulter will make his AFL debut in Round 7, he was selected at pick 30 in the 2020 AFL Draft. He will likely play the majority of game time on a wing, he has averaged 22.5 Disposals, 5.0 Marks & 2.5 Tackles in the VFL this season. The Magpies are providing opportunities to younger players this season, Poulter has a chance to lock down that position early in his career.

Bosenavulagi was able to take advantage of his opportunity in defence back in Round 5, he has averaged 68.0pts from his last 2 games. The Kangaroos are in a decent rebuild phase, this will likely provide long term opportunities to players such as Bosenavulagi if he continues to deliver in his defensive role. He appears to be settled into that role, hopefully Nth Melbourne senior coach David Noble backs his young defender for quite a few games yet.

It was a slow day for Macrae in Round 6, he recorded 9 Disposals & 1 Mark for just 26pts. His potential upside does remain quite solid, an increase in midfield usage will likely result in an increase in fantasy output. The Break Even (BE) for Macrae has increased, a healthy return would be optimal this week to keep alive his chances of a creating decent profit .