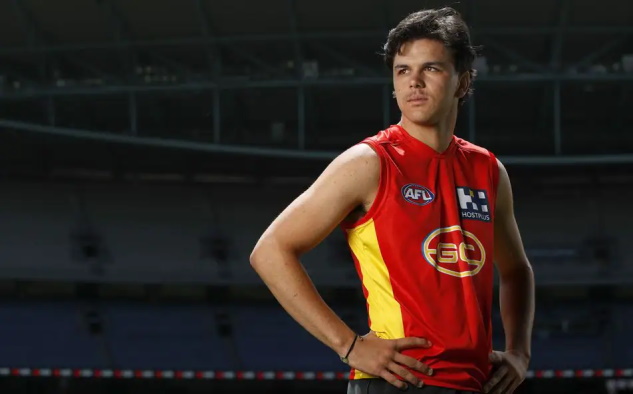 The potential role for Elijah Hollands in 2022 has been further explained, he is likely to be used through a midfield/forward role but with his elite disposal could see some time spent across half-back.

Gold Coast Recruiting Manager Kall Burns provided the latest update on Hollands in an interview with Callum Twomey last week on the Road to the Draft Podcast.

Senior coach Stuart Dew will have the final say over pre-season according to Burns.

Hollands injured his knee in his draft year of 2020, he was selected at pick 7 by the Suns in the same year.

He spent his first year at an AFL club in rehab & was back to playing VFL by mid-year, he is expected to make an early AFL debut in 2022.

“He was capable of playing multiple roles (in his draft year), that was the exciting part about.. adding someone like Elijah to our group”

“Whether that’s a mid/forward role which.. he does so well, he’s also a really nice ball user.”

“He has the potential to play off half-back, he’s really courageous in the air.”

“A lot of attributes line-up to him being able to play a number of positions which we feel is so crucial to our list needs.” Gold Coast Recruiting Manager Kall Burns via Rod to the Draft Podcast.

An early season debut is likely for Hollands, there is the potential for him to be used in multiple roles due to his versatility in his early games at AFL level.

The fantasy outlook for Hollands is strong, as Gold Coast continue to build their list expect him to be well entrenched inside the best possible line-up as he gains experience.

Hollands is a very strong selection in season long fantasy if he is named at Round 1, he’s a potential late round flyer in standard draft leagues.