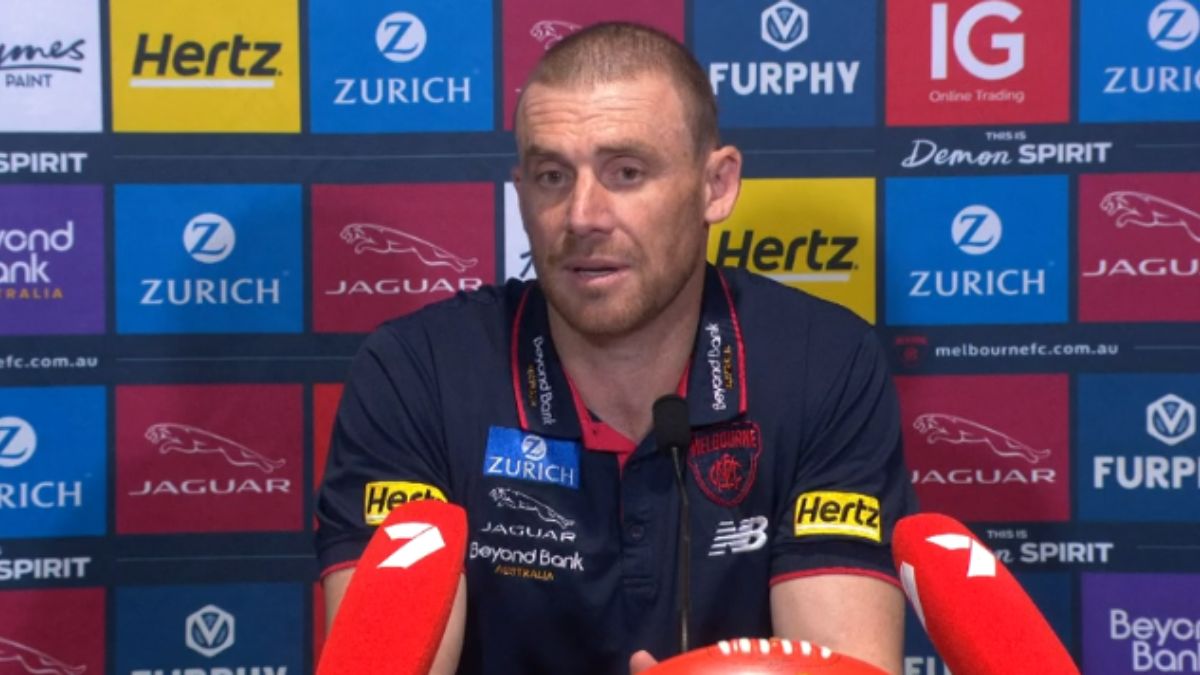 “He just had a little knock late in the game.”

“We put him in the first ruck tonight, enabled Max to play a little bit more forward at times.”

“We didn’t have James Harmes available.”

“We’ve been looking at it for the last few weeks about when the best time was to move him back into the midfield.”

“We might see a little bit more of Angus through the midfield as we move to the next few weeks.”

“Has been in really good form in the VFL and he was ready for that opportunity down back.”

“He’ll get though all his protocols and be right to go (next game).”

“Is looking really likely that he’ll be available to play (next game).”

“It looks like he’s got some groin injury of some sort.”

“Just got a knee in the backside and unfortunately just couldn’t function.”

“He took a big step forward today (playing VFL), we thought he needed the run.”

“We’re anticipating Checkers will be right next week.”

“I’d be surprised if we played all three (Grundy, Cameron & Cox).”

“It will either be badly bruised or could be a small fracture in his hand.”

“I thought played pretty well particularly in the 3rd quarter as a half-back flanker in a different spot.”

“I thought he started a little untidy but he worked into the game.”

“He really battle to get up for last week.”

“He would have been at high risk to be injured today (if he played).”

“I think he’ll be right to go next week.”

“We thought we needed some serious fire power ahead of the footy (started forward).”

“It probably didn’t work to the way we wanted it.”

“We swung him back after half-time.”

“His ability to close space in a hurry has certainly been a highlight over probably most of the year.”

“His ability to go from contest to contest has been impressive.”

“He should be available next week.”

“He got tagged first quarter and still did a really good.”

“He was a bit rusty in some things in the game but just pleasing that he gets to run out and play.”

“We’ll get him up next week hopefully and everything goes to plan.”

“We probably wanted to keep the Hawks guessing a bit.”

“We didn’t know (Ned) Reeves was going to be injured (on initial team selection).”

“It’s good for Row he’ll get some confidence out of that.”

“He popped his shoulder (subbed out).”

“Has had a little bit of a sore knee for a while.”

“He has got a really nasty cork, he could hardly walk on it at half time”

“I was glad he got an opportunity and didn’t look out of place.”

“I thought Jeremy Cameron playing up the ground a little bit had a real impact.”

“We thought he was really solid.”

“He’ll come into our team next week.”

”I thought he was super.”

“I thought he had a big impact on the game.”

“Our main session this week he wasn’t able to get through.”

“It wouldn’t surprise me if he misses another one.”

“He spent most of the last quarter forward (quad cork).”

“We’ve changed it up a little this year

“We know that (Adam) Saad is an outstanding player and very influential on games.

“He has found himself bumping in and out of that midfield throughout the year.”

“Tonight he had a slightly more important role ahead of the ball and he played it to perfection.”

“He was in a rare zone tonight playing some great footy and leading from the front.”

“Cam off with a shoulder.”

“Obviously Newman cut his knee so that was going to be hard for him to come on.”

“Matt Kennedy had the concussion.”

“Particularly in the 3rd quarter he was really impressive through that period of time.”

“One part is the opportunity the rest has been Mabior grabbing those opportunities.”

“He’s only going to get better we think.”

“He played a really strong game Izak and influential game.”

“When he’s on like that he’s a handful for the opposition.”

“We anticipate it’s just this week so he’ll come back in.”

“Obviously took him a bit of time to get into the season missing a full chunk of pre-season nut he hasn’t let us down hardly ever in his career and he didn’t again today.”

“He seems to be growing in that role really well (half-back).”

“We tried Luke Shuey at half-back at stages and thought he had a bit of influence.”

“He felt it the hamstring that is.”

“I think Petruccelle went off with a bit of a tight hamstring as well.”

“Probably the most consistent player I’ve ever coached.”

“We’re hoping it’s not too severe.”

“He’s been incredible since he’s come in.”

“It’s at the stage now where we can push the envelope but if we do make it, if we hurt it again it’s season over.”

“In hindsight it was the wrong decision to have Darcy has the med-sub.”

“He actually turned up on Monday with a little bit of a sore quad, it didn’t improve enough during the week to play.”

“He’s definitely there at the moment (hospital).”

“We like to have at least one guy who can really attack of the back half.”

“Without Aaron Hall in there tonight we thought that we needed Jaidyn down there.”

“I thought he stood up really well.”

“Bone bruising on his elbow early on in the game.”

“I thought he was good, I thought his impact early in the game in particular.”

“He was getting tight in the calf and it was starting to get progressively worse throughout the game.”

“Hopefully there’s nothing too serious there.”