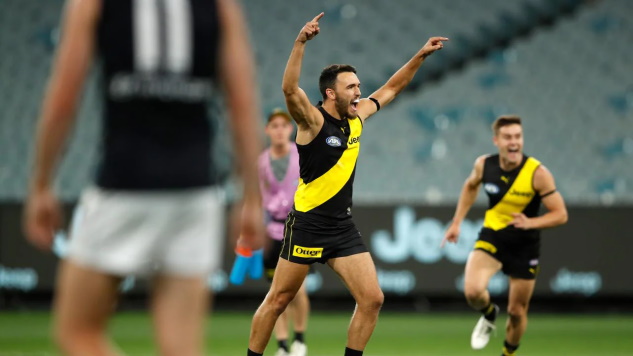 Shane Edwards has been sidelined with an ankle injury, the incident occurred in Round 8 against Geelong.

He has been diagnosed with a medial strain, he is out for at least the short term.

Tigers senior coach Damien Hardwick stated on Monday night via AFL 360 that he was hopeful Edwards would miss 2-3 weeks.

“Initially, we were fearing the worst (it could have potentially been) the old syndesmosis injury, but scans were really good and showed a significant deltoid injury, the medial ligament of the ankle.”

“Shane has been in a boot… he has come out of the boot in the last 24 hours and has been walking around and feeling quite good. At this stage, we are sort of saying it is a short to medium-term injury, but it is a bit of a watch this space (because) he is feeling pretty good.”

“Our fingers are crossed that it is going to be more on the shorter-term end.” Tigers Physical Performance Manager Peter Burge.

Richmond will be without Trent Cotchin, Dion Prestia, Kane Lambert, Shane Edwards & now Shai Bolton through the midfield for the short to medium term.

Tigers senior coach Damien Hardwick provided an insight into team selection for Round 9 & slightly beyond on Monday night.

“Some players will get an opportunity to play & we’ll get a look at those players this Saturday night” Damien Hardwick via AFL 360.

Shane Edwards has averaged 77.0pts from 8 games this season, he recorded a season high 98pts. in Round 5.

The latest injury to Richmond does leave them quite shorthanded in the midfield, Riley Collier-Dawkins has been impressive in his 2 games.

Will Martyn & Hugo Ralphsmith have been on the fringe of selection at times this season, Tigers senior coach Damien Hardwick may also want to add experience back into the team.

Edwards is a trade-out in AFL Fantasy classic.