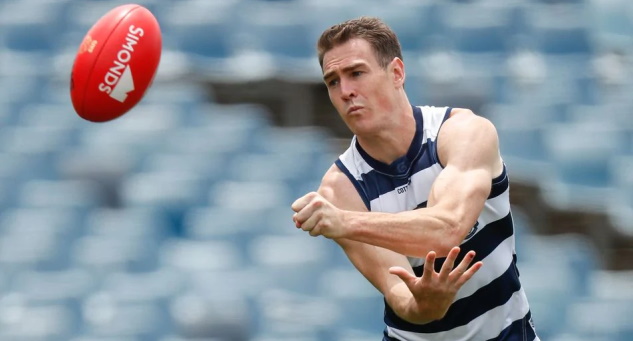 Jeremy Cameron has been sidelined for an extended period, he injured his right hamstring against Essendon on Friday night at GMHBA Stadium.

Scans have revealed a hamstring strain, it is a recurrence of his previous hamstring injury during the pre-season via Cats Media.

It is expected Geelong will be conservative on a Cameron return with just 7 games remaining in the 2021 H&A season.

“Our medical and conditioning teams are working closely with Jeremy on his rehab program. It will be a matter of monitoring how he progresses to then determine a timeline on his return to football.” Cats GM of Football Simon Lloyd.

Geelong will likely provide updates as his rehabilitation progresses.

The loss of Cameron for several weeks will require change in the Geelong forward line.

Patrick Dangerfield could be an option to spend more time forward after recently seeing an increase in midfield usage, the Cats have several midfielders available to cover Dangerfield in the short term.

Dangerfield did spend a fair bit of time forward last year as a marking option but did also have a lingering groin issue, Jeremy Cameron was also yet to arrive at the Cats. A rewind back to that set-up from last year is possible.

Esava Ratugolea may be a key option forward for Geelong, although his ability to impact when moving forward this year has been minimal.

Key forward Josh Jenkins is also an option for the short term, he also has the ability to pinch hit in the ruck if required.

Geelong senior coach Chris Scott has shown a tendency to move players around, expect some volatility in player roles.

Jeremy Cameron is a trade out in AFL Fantasy classic.