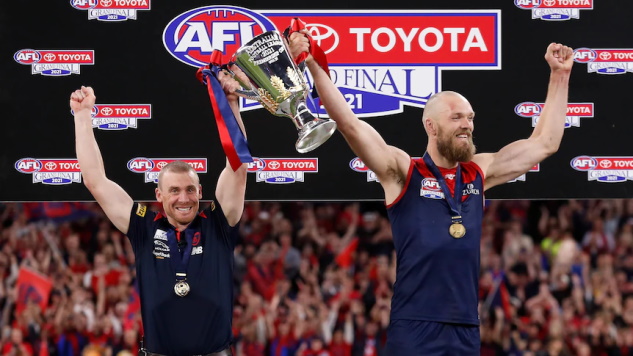 Melbourne won the 2021 AFL premiership, they broke a 57 year premiership drought be defeating the Western Bulldogs by 74pts at Optus Stadium in Perth on Saturday.

A look back at the Melbourne premiership team provides some intelligence on decisions made in list management over the last decade.

A total of 17 players were selected by Melbourne through the draft.

2009 – Max Gawn was selected at pick 34, he captained Melbourne to their first premiership in 57 years.

2013 – Christian Salem was selected at pick 9, the Demons traded away pick 2 (Josh Kelly) to the Giants to acquire the selection for Salem. Dom Tyson was also part of this deal.
Trade Detail: Melbourne received Dom Tyson & picks 9 & 53 – GWS received picks 2, 20 & 72.

2014 – Angus Brayshaw was selected at pick 3, this pick was a compensation pick for James Frawley.

A total of 5 players were acquired via a trade:

Michael Hibberd was traded to Melbourne at the end of the 2016 season, he had previously played 84 games for Essendon.
Trade Detail: Melbourne received Michael Hibberd & pick 59 – Essendon received picks 29 & 68.

Steven May was traded to Melbourne at the end of the 2018 season, he had previously played 123 games for Gold Coast.
Trade Detail: Melbourne received Steven May & Kade Kolodjashnij – Gold Coast received pick 6.

The 2014 draft was kind to Melbourne, they acquired Christian Petracca (pick 2) & Angus Brayshaw (pick 3) at the top end of the draft.

Later in the draft the Demons selected Alex Neal-Bullen at pick 40.

Jake Lever was selected by Adelaide at pick 14, he was traded to the Demons at the end of the 2017 season.

Ed Langdon was selected at pick 54 by Fremantle, he was traded to the Demons at the end of the 2019 season.

The Melbourne premiership team had an average age of 24.5.

There was only one player for Melbourne over the age of 30, Michael Hibberd was 31.

Jake Bowey was the youngest player at 19, he played his 7th game in the 2021 Grand Final.