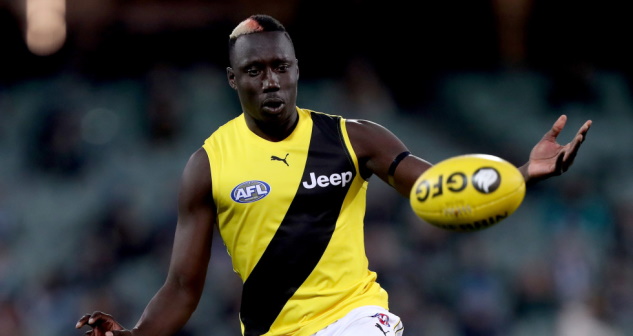 Mabior Chol has joined Gold Coast as an unrestricted free agent, he has played 31 games for Richmond.

“I’m just really grateful that the club has shown a lot of interest in me and I’m the player for them, hopefully I can pay them back for all the respect and trust they’ve shown me to go after me.” Mabior Chol via Suns Media.

“Everyone at the football club would like to wish Mabior all the best for his exciting new opportunity at the Gold Coast” Richmond GM of Football Talent Blair Hartley via Tigers Media.

End of Round 2 compensation

FANTASY IMPACT: Mabior Chol averaged 60.5pts from 10 games in 2021, he scored a season high 97pts in Round 12 against Essendon.

It is expected he will play a fwd/ruck role next season, he is set to provide ruck support for Jarrod Witts.

Chol is a pass in season long fantasy at Round 1, he’s a late round selection at best in deep draft leagues but that would need to be on the back of decent forecast ruck usage.