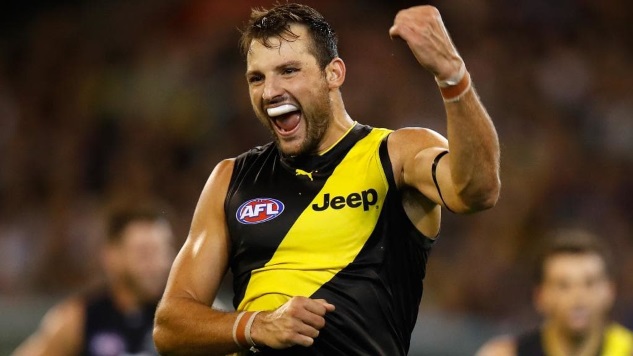 Toby Nankervis will be sidelined for an extended period, he injured his knee at the opening centre bounce in Round 11 against Adelaide.

He was assessed in the change rooms shortly thereafter, he returned & completed the game.

Nankervis has been diagnosed with a PCL sprain via Tigers media, he will be assessed over the next week or two which may include an exact timeline for a return.

At this stage he is set to miss several weeks.

“He played the whole game out and was a little bit sore, but our fingers were crossed obviously post-game that he would wake up feeling alright the next day and that there was not too much going on.”

“But, he had some scans and definitely sprained his PCL, which is going to require a couple of weeks out of the game, just for it to glue up and for him to do a little bit of strength work around that and get his stability back to normal.”

“We will have a better idea in the next week or two about his return to play, but at this stage, it is probably a medium-term injury.” Tigers Physical Performance Manager Peter Burge.

Toby Nankervis has averaged 84.0pts from 11 games this season, he has averaged 93.9pts from his last 8 games.

With Ivan Soldo still sidelined with his ACL injury the Tigers will have their depth tested, Tom Lynch is also sidelined through injury.

Callum Coleman-Jones & Mabior Chol have shared ruck duties in the VFL side this season, they both played in Round 11 against Adelaide.

Sampson Ryan is still raw but he could offer up ruck support if required.

Tigers senior coach Damien Hardwick hasn’t been afraid to concede hit outs in games, midfielder Shaun Grigg was used in the ruck several years ago. Marlion Pickett has been used in the ruck at times this season.

Nankervis is a trade-out in AFL Fantasy classic.