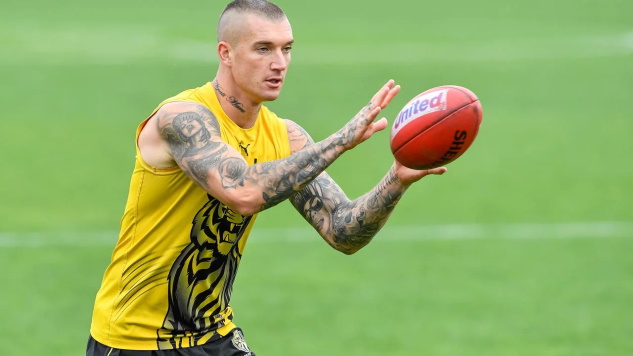 Dustin Martin could be set for a role change in 2022, he has lost a substantial amount of weight in the weeks following his season ending injury.

He sustained a lacerated kidney against Brisbane in Round 18 at Metricon Stadium, he underwent surgery at the time & did not return to football.

Richmond Senior Club Advisor Neil Balme provided a health update on Martin via RSN on Tuesday, he also indicated a potential role change for the 2022 season.

“He looks fantastic, he’s actually lost a lot of weight.”

“He wants to keep a bit of it off, he needs to put a little bit more on to play.”

“But if he keeps a bit of it off, he might be able to play even more in the midfield rather than just as a forward/mid.”

“He might be more of a mid/forward, which will make him even better.”

“But he seemed to be in really good shape.”

“We’re really excited about what he’s going to show us this year (2022).” Richmond Senior Club Advisor Neil Balme via RSN.

FANTASY IMPACT: Dustin Martin averaged 81.3pts from 16 games in 2021, he scored a season high 131pts in Round 1 against Carlton.

He has played a mixture of midfield & forward in recent years for the Tigers, an increase in midfield usage would certainly provide an opportunity to increase his scoring output.

In 2017, Martin averaged 111.4pts running primarily though a midfield role.

The increase in midfield usage would need to be confirmed over the pre-season for Martin, he recorded 67.2% of centre bounce usage from 16 games in 2021, his role was to move forward to create a mismatch forward in general play.

The centre bounce usage will likely remain strong for the 2022 season, but remaining in a midfield role would certainly be appealing for fantasy.

He’s a consideration for season long fantasy at Round 1, it’s worth monitoring his role over the pre-season with a potential to move him ahead of likely ADP if a near pure midfield role is confirmed.